Kubernetes is an open source project to manage a cluster of Linux containers as a single system, managing and running Docker containers across multiple hosts, offering co-location of containers, service discovery and replication control. It was started by Google and now it is supported by Microsoft, RedHat, IBM and Docker amongst others.

Google has been using container technology for over ten years, starting over 2 billion containers per week. With Kubernetes it shares its container expertise creating an open platform to run containers at scale.

Kubernetes is still at a very early stage, which translates to lots of changes going into the project, some fragile examples, and some cases for new features that need to be fleshed out, but the pace of development, and the support by other big companies in the space, is highly promising.

The Kubernetes architecture is defined by a master server and multiple minions. The command line tools connect to the API endpoint in the master, which manages and orchestrates all the minions, Docker hosts that receive the instructions from the master and run the containers.

Kubernetes is defined by states, not processes. When you define a pod, Kubernetes tries to ensure that it is always running. If a container is killed, it will try to start a new one. If a replication controller is defined with 3 replicas, Kubernetes will try to always run that number, starting and stopping containers as necessary.

The example app used in this article is the Jenkins CI server, in a typical master-slaves setup to distribute the jobs. Jenkins is configured with the Jenkins swarm plugin to run a Jenkins master and multiple Jenkins slaves, all of them running as Docker containers across multiple hosts. The swarm slaves connect to the Jenkins master on startup and become available to run Jenkins jobs. The configuration files used in the example are available in GitHub, and the Docker images are available as csanchez/jenkins-swarm, for the master Jenkins, extending the official Jenkins image with the swarm plugin, and csanchez/jenkins-swarm-slave, for each of the slaves, just running the slave service on a JVM container.

The examples will use a local cluster running on Vagrant, using Fedora as OS, as detailed in the getting started instructions, and have been tested on Kubernetes 0.5.4. Instead of the default three minions (Docker hosts) we are going to run just two, which is enough to show the Kubernetes capabilities without requiring a more powerful machine.

Once you have downloaded Kubernetes and extracted it, the examples can be run from that directory. In order to create the cluster from scratch the only command needed is ./cluster/kube-up.sh.

Get the example configuration files:

The cluster creation will take a while depending on machine power and internet bandwidth, but should eventually finish without errors and it only needs to be ran once.

The command line tool to interact with Kubernetes is called kubecfg, with a convenience script in cluster/kubecfg.sh.

In order to check that our cluster is up and running with two minions, just run the kubecfg list minions command and it should display the two virtual machines in the Vagrant configuration.

The Jenkins master server is defined as a pod in Kubernetes terminology. Multiple containers can be specified in a pod, that would be deployed in the same Docker host, with the advantage that containers in a pod can share resources, such as storage volumes, and use the same network namespace and IP. Volumes are by default empty directories, type emptyDir, that live for the lifespan of the pod, not the specific container, so if the container fails the persistent storage will live on. Other volume type is hostDir, that will mount a directory from the host server in the container.

In this Jenkins specific example we could have a pod with two containers, the Jenkins server and, for instance, a MySQL container to use as database, although we will only focus on a standalone Jenkins master container.

In order to create a Jenkins pod we run kubecfg with the Jenkins container pod definition, using Docker image csanchez/jenkins-swarm, ports 8080 and 50000 mapped to the container in order to have access to the Jenkins web UI and the slave API, and a volume mounted in /var/jenkins_home. You can find the example code in GitHub as well.

The Jenkins web UI pod (pod.json) is defined as follows:

And create it with:

After some time, depending on your internet connection, as it has to download the Docker image to the minion, we can check its status and in which minion is started.

If we ssh into the minion that the pod was assigned to, minion-1 or minion-2, we can see how Docker started the container defined, amongst other containers used by Kubernetes for internal management (kubernetes/pause and google/cadvisor).

Kubernetes allows defining services, a way for containers to use discovery and proxy requests to the appropriate minion. With this definition in service-http.json we are creating a service with id jenkins pointing to the pod with the label name=jenkins, as declared in the pod definition, and forwarding the port 8888 to the container’s 8080.

Creating the service with kubecfg:

Each service is assigned a unique IP address tied to the lifespan of the Service. If we had multiple pods matching the service definition the service would load balance the traffic across all of them.

Another feature of services is that a number of environment variables are available for any subsequent containers ran by Kubernetes, providing the ability to connect to the service container, in a similar way as running linked Docker containers. This will provide useful for finding the master Jenkins server from any of the slaves.

Another tweak we need to do is to open port 50000, needed by the Jenkins swarm plugin. It can be achieved creating another service service-slave.json so Kubernetes forwards traffic to that port to the Jenkins server container.

The service is created with kubecfg again.

An all the defined services are available now, including some Kubernetes internal ones:

Replication controllers allow running multiple pods in multiple minions. Jenkins slaves can be run this way to ensure there is always a pool of slaves ready to run Jenkins jobs.

The podTemplate section allows the same configuration options as a pod definition. In this case we want to make the Jenkins slave connect automatically to our Jenkins master, instead of relying on Jenkins multicast discovery. To do so we execute the jenkins-slave.sh command with -master parameter to point the slave to the Jenkins master running in Kubernetes. Note that we use the Kubernetes provided environment variables for the Jenkins service definition (JENKINS_SERVICE_HOST and JENKINS_SERVICE_PORT). The image command is overridden to configure the container this way, useful to reuse existing images while taking advantage of the service environment variables. It can be done in pod definitions too.

Create the replicas with kubecfg:

Listing the pods now would show new ones being created, up to the number of replicas defined in the replication controller.

The first time running jenkins-swarm-slave image the minion has to download it from the Docker repository, but after a while, depending on your internet connection, the slaves should automatically connect to the Jenkins server. Going into the server where the slave is started, docker ps has to show the container running and docker logs is useful to debug any problems on container startup.

The replication controller can automatically be resized to any number of desired replicas:

And again the pods are updated to show where each replica is running. 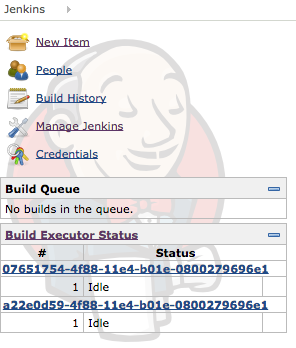 Right now the default scheduler is random, but resource based scheduling will be implemented soon. At the time of writing there are several issues opened to add scheduling based on memory and CPU usage. There is also work in progress in an Apache Mesos based scheduler. Apache Mesos is a framework for distributed systems providing APIs for resource management and scheduling across entire datacenter and cloud environments.

One of the benefits of using Kubernetes is the automated management and recovery of containers.

If the container running the Jenkins server dies for any reason, for instance because the process being ran crashes, Kubernetes will notice and will create a new container after a few seconds.

And some time later, typically no more than a minute…

Running the Jenkins data dir in a volume we guarantee that the data is kept even after the container dies, so we do not lose any Jenkins jobs or data created. And because Kubernetes is proxying the services in each minion the slaves will reconnect to the new Jenkins server automagically no matter where they run! And exactly the same will happen if any of the slave containers dies, the system will automatically create a new container and thanks to the service discovery it will automatically join the Jenkins server pool.

If something more drastic happens, like a minion dying, Kubernetes does not offer yet the ability to reschedule the containers in the other existing minions, it would just show the pods as Failed.

To stop the replication controller, setting the number of replicas to 0, and causing the termination of all the Jenkins slaves containers:

To delete the jenkins server pod, causing the termination of the Jenkins master container:

To delete the services:

Kubernetes is still a very young project, but highly promising to manage Docker deployments across multiple servers and simplify the execution of long running and distributed Docker containers. By abstracting infrastructure concepts and working on states instead of processes, it provides easy definition of clusters, including self healing capabilities out of the box. In short, Kubernetes makes management of Docker fleets easier.

Carlos Sanchez has been working on automation and quality of software development, QA and operations processes for over 10 years, from build tools and continuous integration to deployment automation, DevOps best practices and continuous delivery. He has delivered solutions to Fortune 500 companies, working at several US based startups, most recently MaestroDev, a company he cofounded. Carlos has been a speaker at several conferences around the world, including JavaOne, EclipseCON, ApacheCON, JavaZone, Fosdem or PuppetConf. Very involved in open source, he is a member of the Apache Software Foundation amongst other open source groups, contributing to several projects, such as Apache Maven, Fog or Puppet.